In the old days, fishing was simple. A long stick, a braided line, and a hook with live bait. Your line was probably made from horse hair, your hook an old re-purposed nail or screw, and your bait was whatever you dug up on the river bank. People caught fish, people ate the fish, and that was basically it.

Sure it was fun, and there were some monsters caught. Over time, people began to see fishing as a hobby and sport, more than a method of food gathering. Thus, technology infiltrated a simple past time, just like it seems to do with everything these days.

First, reels and rods evolved, and the line with them. The baits became plastic and artificial, and people now develop baits and hooks designed to catch nothing but big fish.

Of course, there is no magic bait. Nothing of this world can guarantee that you’ll never catch a quarter pound squeaker of a bass again, but there are some baits to try that might increase your odd. Thanks to outlets such as YouTube, more and more people are being introduced to fishing, and learning new techniques.

While not a new technique, the drop-shot has become wildly popular in the past few years. It’s simple design, finesse action, and consistent fish catching has placed it center of the spotlight for anybody targeting pressured fish. Nothing is perfect though, and there can be a few hangups in the rigging. Literally.

While super effective, when you add a second line to your basic reel-line-bait setup,

there’s sure to be some crossover. In the case of the drop-shot, the crossover is literally a cross over, and lines get tangled almost every hook set. The lines twist as they are being worked through the water columns, and eventually you have to spend precious time managing your line. VMC has created a hook recently designed to ease your drop shot experience. Thanks to the 360 degree wire-post, the line twist caused by similar hooks is eliminated, and the Neko Hook design allows for better hook sets with bigger baits, helping you catch more fish. If you’re looking for the hook and setup for more big fish, the Spin-Shot Neko is the way to go. 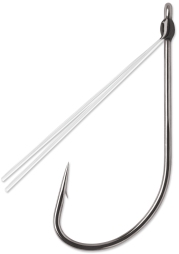 While most people are focused on open water finesse, we all know that the biggest, baddest fish live in heavy cover. They lurk in the shadows, covered in weeds and grass so thick that most anglers wouldn’t think of dropping a finesse rig into their midst. Luckily, VMC just dropped another new hook. Enter the Weedless Neko.

While weedless hooks are nothing new, VMC decided it was time the Neko hook finally got the weedless treatment it deserved. The ability to throw a Neko style hook, a finesse rig, into the thickest of cover is a game changer. You can sit on the water and catch average fish all day. Option two, move towards cover and target fish that haven’t seen the light of day in years.

If you are interested in either hook, they can both be found on Rapala’s website under the VMC tab, or by following the links in this article. Just click on the name of the hooks. If you fish big water and lakes, and you haven’t at least attempted a finesse drop-shot rig, you need to quit messing around and go catch some fish you want to tell stories about.